“In the old days, the old fellows were sitting around, all the women were laughing , joking – so all that conversation has gone into the basket.”

This quote gathered to much up, how I feel about my practise.
When I look again at the cloth were people have embroidered on on now 4 occasions, it seems as if I can still her the voices, the stories and the laughter. And I see as well those, how were quietly stitching, not saying much, but listing and still part, adding their stitches.
My practise has these two aspects
– creating spaces where people can experience again a communal situation, of working with their hands creatively and being with people
– working on my own with very slow technique using Embroidery, Knitting, Crochet and very recently hand spinning as a meditative activity
– Working with my “traveling” projects where ever I am, on the train, in Cafés, with friends talking at the Folk evenings in my home town

Sometimes when I pick up a embroidered cloth, or a hat, knitted from my own pattern and from well chosen wool, I smile as the memories flood back.
The more I think about it, the more I realise that the underlying intend for my activities, shared and alone is Wellbeing.

Some years ago, during the annual “Woolfest” in Cockermouth near Carlisle, I found at the stand off the Mulberry Dyer (http://www.mulberrydyer.co.uk/) a tool called ‘Lucette’.

This tool predates French Knitting and was used for braiding a wide range of everyday items.

In my research on the internet I found a very interesting range of design, some with a handle, some without like the one above.

From Wikipedia, the free Encyclopaedia

A lucet is a tool used in cord making or braiding which is believed to date back to the Viking[1] and Medieval[2] periods, when it was used to create cords that were used on clothing,[1] or to hang items from the belt.[3][4] Lucet cord is square, strong, and slightly springy. It closely resembles knitted I-cord or the cord produced on a knitting spool. Lucet cord is formed by a series of loop like knots, and therefore will not unravel if cut. Unlike other braiding techniques such as kumihimo, finger-loop braiding or plaiting, where the threads are of a finite length, lucetted braids can be created without pre-measuring threads and so it is a technique suited for very long cords.

Archaeological finds and a literary description of lucets strongly suggest that its use declined after the 12th century,[2] but was revived in the 17th century.[5] Its use waned again in the early 19th century.[4]

A modern lucet fork, like that pictured, is normally made of wood, with two prongs at one end and a handle on the other. It may also have a hole through which the cord can be pulled. Medieval lucets, in contrast, appear to be double-pronged, straight-sided implements, often made of bone.[6] Some were shaped from hollowed bones, left tubular, presumably so that the cord could be drawn through the centre hole.[2]

In a seminar, where we were asked to show an example of our practice, I decided to demonstrate how to use a Lucette.

Two of my fellow students, Claire and Vicky agreed to volunteer and received a crash course in “lucetting”!!!

We used wool from the Vicarage Farm in Penryn, which I had bought some time ago at the Falmouth Farmers Market.

My two volunteers learned the trick of the trade very quickly and enjoyed the new techniques.

I was inspired by the artist Francoise Dupre, whose work incorporates French knitting and participation.

A Stitch at Time

Stitching and Making,
Wellbeing and Sustainability,
Solitude and Sharing.
Joy and Happiness

Join 418 other subscribers
Follow One Stitch at Time on WordPress.com

One Stitch at Time

One Stitch at Time

A Journey in Stitch 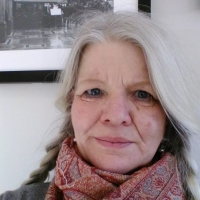 living in the moment, breathing into the presents and making to feel alive

A Journal of Observations

The ways of the whorl

wherever the spinning takes me

Finding the beautiful in the everyday

adventures in learning to sew

Songs with a smile and a heart